Where Bush slept in Beijing 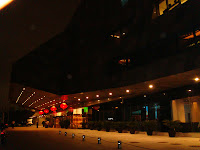 Monday night here in Beijing and I was off to have dinner at the newly opened Westin Hotel along the East Third Ring. Little did I realize that the Westin is also where the Bush family has been staying during the Olympics. I should have guessed by the police cars outside and the security check inside the front door. But no. It wasn't until I met with the hotel's management that I got the inside scoop. The president had checked into the Presidential Suite for four nights, with his wife, daughter and father in tow. The current President Bush did not venture outside the suite but his dad felt free enough to roam about the hotel. Bush Sr. had dinner one night at a private dining suite of the hotel's Chinese restaurant.
Some curious things I learned. The security force included 30 dogs of all kinds and 100 secret service officials. The President used the Service elevator to leave the hotel secretly to go to the Games. He used in-room dining exclusively and ordered mostly Cantonese food, which he loves. That in spite of the fine dining steakhouse, Grange.
When I asked the general manager why the U.S. government chose the newly opened Westin for its visit, he said the contract was negotiated over a 10-month period. What sealed the deal, I think, is that the soon-to-open U.S. Embassy is just across the boulevard from the Westin -- which also is on a straightaway to the Games and the Airport.
All in all, it was more than a good trial run for the hotel's opening just three weeks earlier. Bush even held a press conference at the hotel.
Here's a photo I took during my brief visit of the Westin, outside on a balmy summer night in BJ.
Posted by Rebecca A. Fannin at 7:14 AM