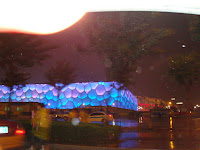 I am watching the Olympics via web 2.00-- on www.pps.tv.com, an online video streaming site that has rights to broadcast the Games in China. Interesting. I first discovered the so-called PPStream in March 2007, when the Shanghai startup got funding from two venture capital firms I know, Qiming Ventures and Ceyuan Ventures.
Too bad I can't locate the English-language version of the site, but I am "making do" by guessing which Chinese characters represent which command.
NBC, by the way, does not have rights to broadcast the games in China. That belongs to the government-owned CCTV. I tried logging on to NBC, but got a message telling me that the site could not be accessed here.
For now, I will be PPS-ing. So long. Time for men's gymnastics. See photo I took at the Olympics Village last Sunday night. Can't wait to go again on Tuesday!
Posted by Rebecca A. Fannin at 4:58 AM