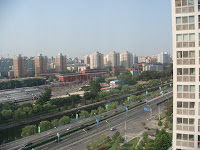 The hotels may be empty here in Beijing but the skies surely are blue!
See Monday scene, looking west toward the Beijing railway station.
The only thing happening in the hotels is the hospitality centers set up by the corporate Olympic sponsors, including Lenovo, Adidas, Nokia and VW. These places all sport relaxing places to have a drink or snack, while networking with colleagues.
They're off limits to all but the host's invited guests.
I stopped by the Nokia booth to see if I could get some help in accessing the Internet from my phone. I don't have a data package from China mobile, but we were able to pick up a wireless signal and I was on.
Tonight, at the Games, I am going to try out the new 3G phone service here. If it works, I will be able to stream live video from my phone, courtesy of a new service called Qik. I was thrilled to be interviewed on Qik by famous blogger Robert Scoble. So I know it works in the U.S. Now for China!
Posted by Rebecca A. Fannin at 5:39 PM