Everyone knows cleantech is a hot investment category in the U.S. But what about in such emerging markets as India?
On a recent tech tour (self-guided) of Bangalore, Delhi and Mumbai, I found that India too has its share of entrepeneurs and investors who want to save the world. I interviewed the founders of several young businesses that are helping to improve the environment -- from electronic waste recyling facilities to solar-powered LED lights to electric cars and water purification systems. These startups are proving that cleantech enterprises can make money, scale in size and do social good at the same time.
Several of of these are startups funded by the same venture investment firms in Silicon Valley that support cleantech deals in the U.S.--Kleiner Perkins and Draper Fisher Jurvetson, to name two prominent examples.
Here's a sampling of some finds during my three-week journey.
On the outskirts of Bangalore in an industrial area, Kotak Solar is churning out solar-powered products of many kinds--to light up streets and gardens with LEDs, heat swimming pools and provide drinking water. Chief Executive K. Srinivas Kumar gave me a tour of the operations housed in the same building as his office.
To prove a point that solar can work for every day practical uses, Kotak Solar recently electrified a village in India with solar power. Now 120 families in this remote spot pay just five cents per day to get light and drinking water, plus juice for a community-shared mobile phone, plasma TV and Internet connection.
The next step is to take this pilot project to more villages in India, where 80,000 villages or 45 percent of the total, are still not on the grid, Kumar says. "We want to take this trend-setting model on a much larger scale," he adds.
Kotak Solar generated revenues of $25 million in 2009 -- up from $15 million the year before -- and the Chief Executive says the business has been profitable since one year after it was formed in 1997. Little wonder that it attracted $6 million-plus from Kleiner Perkins and Sherpalo Ventures in October 2008.
In Delhi, I met with a Stanford MBA grad and former Peace Corps volunteer Sam Goldman, who's also into solar. He's formed a startup in Delhi named D.Light Energy that produces and sells solar-powered LED lanterns to replace kerosene lights in the emerging market villages. In two years' time, he's sold 100,000 lanterns to villagers in India, east Africa and Latin America. The lights help moms work on handicrafts at night-time to earn some income and get kids to study after sun fall.
The potential is huge. Goldman says about 1.6 billion people worldwide are off the grid. He's aiming to reach 5 million people. His startup has funding from Draper Fisher Jurvetson and Garage Technology Ventures plus two social investor groups and is aiming to generate revenues of $25 million this year.
About an hour's drive from DLight's offices in central Delhi, I arrive at the offices of Attero Design in a gritty area of the Noida district. Here, CEO Nitin Gupta describes how his startup recyles electronic products and extracts precious minerals for sell on the London and Indian metal exchanges. His one-year-old startup made $1 million in revenues in 2009 and is aiming for $12 million in 2010.
With only a powerpoint and a dream to improve the environment, Gupta raised $6.3 million from Draper Fisher Jurvetson and NEA-IndoUS Ventures in May 2008. He's looking to soon raise about $7 million. So far, the startup has invested $5 million. Most of that went to setting up the plant about 200 kilometers north of Delhi in Roorkee. To build the plant, Attero got tax breaks from the state government and research help from the local Indian Insittute of Technology.
Forbes discovered the Reva electric car back in 2005, but that didn't prevent me from meeting with the founder Chetain Miani (pictured, with the author) at his headquarters in Bangalore, about a twenty-minute drive from the world headquarters of Infosys. Here, Miani showed me the electric powered-roadster that Reva is coming out with in 2011.
Not wasting a PR moment, Miani led me through car's features: a top speed of 130 kilometers, a range of 200 kilometers, an optional solar panel that can add eight kilometers driving distance, a choice of 2,000 colors, automatic transmission, and a telematics system where drivers can send a SMS to get a power boost to make it home in case the battery runs low.
Reva's new solar-powered plant that I toured will produce 30,000 of these vehicles -- there are 3500 on the road now, including Miani's own Reva -- and take the cars into Europe and Latin America, Japan, thanks in part to investment of $55 million from Draper Fisher Jurvetson, among small investors. So far, the cars are sold mostly in Bangalore and London. Once the 30,000 vehicles are sold, Reva will not exactly be within GM's range but will generate a respectable $500-$600 million in revenues, up from the current $10 million currently.
I asked Miani why anyone would want a city car other than Reva? He laughingly answered, "Good question. Let the consumers decide."
When Reva gets to the U.S., I may even give up my Honda Element!
Posted by Rebecca A. Fannin at 9:09 AM

I've managed to squeeze in an entrepreneurship talk in Singapore! Here's the details. Thanks to the Entrepreneurship Centre at the National University of Singapore for hosting the event.

Registration : Admission is FREE
Please register your details HERE by 3 March, noon
Seats are limited so please register early to secure a place

Mobile, Internet, e-commerce, gaming, biotech, cleantech – they’re all booming in the emerging markets of Asia. Some startups with venture funding in these spaces have already scored successes with public listings at high valuations and acquisitions. Others are poised to return profits to their investors as the IPO window begins to open. Startups in Asia scale and get to profitability quickly. The region’s rapid economic growth and switched-on digital communications markets provide the spark for successful entrepreneurship and innovation. Rebecca Fannin, author of Silicon Dragon and a columnist with Forbes, discusses the emerging trends she sees from dozens of recent interviews with entrepreneurs and investors in China, India, Vietnam, Hong Kong and Singapore.
Posted by Rebecca A. Fannin at 9:02 AM 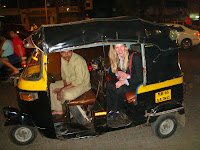 We're having a Silicon Tiger Social in Mumbai, February 22, at the Four Seasons rooftop bar, 6-8PM. Please drop by and say hello.
See http://silicontiger-mumbai.eventbrite.com/
Posted by Rebecca A. Fannin at 1:35 AM

Silicon Dragon: Here come the Viet Gamers
Posted by Rebecca A. Fannin at 12:34 AM

Here Come the Viet Gamers
Rebecca Fannin
Forbes Asia Magazine dated February 08, 2010
Can IDG add its Tencent magic to a mini-Shanda?
Perched above a Big C supermarket on a street jammed with bipeds dodging mopeds, the Ho Chi Minh City headquarters of VinaGame is easy to miss. But inside, amid funky warehouse decor and lots of young staff (see photo) glued to big computer screens, sits Vietnam's leader in online gaming and social networking services. VinaGame aims to be one of the first homegrown Internet successes in its would-be tiger economy, a Vietnamese counterpart to China's huge hits, Shanda Interactive Entertainment and Tencent.
With stated 2009 revenues of $50 million on the back of what it says is 50% annual growth, VinaGame is capitalizing on Vietnam's rapid rise of digital communications and consumerism. Its chairman and chief executive, Le Hong Minh, 32, is an avid gamer himself.
Yahoo! BuzzSo much of one, in fact, that he aborted a financial career to start VinaGame in 2004 with a few fellow gamers. Duty calls now, however: The Saigon native has cut his playing time to one hour a day from his previous four to five hours.
Shy and modest about his accomplishments, which previously entailed posts at Vina Capital Group (no connection) and PricewaterhouseCoopers, Le nevertheless has big dreams. In a barely audible voice, he confides that he wants to take his startup public within a few years on Nasdaq or the Hong Kong Stock Exchange.
A large player in a relatively small pond compared with China or Korea (see table), VinaGame, by its own estimate, has a commanding 65% share of Vietnam's $109 million online-games market. Its titles, such as a localized version of Kingsoft Corp.'s Swordsman Online, attracted 3.5 million to 4 million gamers a month in 2009.
VinaGame also has moved into social networking--and plans to rename itself VNG to reflect its broader services. Two years ago it introduced the Zing.vn portal. Web research service Alexa.com ranks Zing.vn behind only Google and Yahoo in national Web traffic. Meanwhile, ZingMe, which offers music, entertainment, news, e-mail and instant messaging, leads the market with 4 million active users. "VinaGame is being modeled after Tencent," says Benjamin Joffe, chief executive of Asia-focused digital strategy and research firm Plus 8 Star in Beijing, referring to Ma Huateng's popular Internet and instant-messaging service, now worth billions on the Hong Kong exchange.
To read the rest of the story, please click:
http://www.forbes.com/global/2010/0208/companies-technology-online-games-vietnam-social-networking.html
Posted by Rebecca A. Fannin at 12:19 AM

Silicon Dragon: IDG's Scores
Posted by Rebecca A. Fannin at 12:13 AM 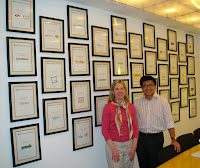 Patrick McGovern recalls when people told him he was crazy to invest in China. That was back in 1993, when International Data Group set up IDG Venture Investment Fund. But he knew something they didn't grasp at first--through its technology, media and research business, IDG had an up-close look at which promising startups might turn into tomorrow's winners.
Since then there's been a gold rush to China, no doubt spurred by the handsome gains that IDG made from early calls. Besides a score on Tencent, IDG sold its holdings in search engine Baidu for $100 a share after buying them for $2.
IDG Ventures has since expanded to Vietnam (2004, with $100 million), India (2006, $150 million) and Korea (2007, $100 million). Says Henry Nguyen (see photo with Silicon Dragon author), IDG's Vietnam chief: "We are trying to replicate what we did in China and do what countries like Korea and Japan have in tech, media and telecom. We are obviously very bullish on Vietnam. It's a matter of using our collective experience across our funds."
Worldwide, IDG manages $3.6 billion in funds--$1 billion of that the firm's money and the remainder from outside investors--and has invested in 240 companies. The Asian deals have generated returns twice as high as those from its U.S. portfolio.
For the remainder of the article, please click:
http://www.forbes.com/global/2010/0208/companies-patrick-mcgovern-china-idg-scores.html
Posted by Rebecca A. Fannin at 12:04 AM