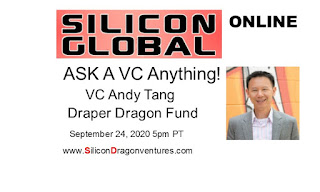 For our 16th Silicon Global Online episode, Ask A VC Anything, our guest speaker was Andy Tang. Tang is a partner at Draper University, a co-founder of Draper Dragon, and CEO of Draper University. In this episode, we discussed the US-China tech “cold war” and its impact on cross-border investors like Tang, how Covid-19 has impacted Draper University and Draper’s portfolio companies, and some new investment and IPO trends that Tang and his partners are looking to capitalize on.

·         ·      The US-China tech “cold war” can be viewed as a good thing for serious cross-border investors. Since natural cross-border activity still needs to happen, Tang views the current turbulence between the two global superpowers as a way to drive out pure opportunistic players.

·        Some US investors will be scared to invest in China and the same will go for Chinese investors looking to invest in the US. But Tang views this as a positive for Draper Dragon and Draper Associates: “The pie will shrink, there will be less competition.”

·        Draper portfolio companies that saw revenue drop in Q1 and Q2 2020 due to Covid-19 have already bounced back in Q3. This includes electric vehicle, online payment and semiconductor companies. Tang even saw portfolio companies with travel exposure bounce back in China.

·        Covid-19 has acted as an accelerant for three main industries that had been held back by regulation: healthcare, education and government tech.

·        In Tang’s view, no matter who wins the 2020 US Election, the sentiment and policy towards China will be similar. Trump going for bans on big Chinese apps such as TikTok and WeChat can be seen as showmanship. Biden might not employ the same tactics but things won’t necessarily get easier for US/China cross-border investors if he wins.

·        Although Tang sees the logic for a tit-for-tat ban of WeChat and TikTok (like China has banned Google and Facebook), he views a ban as ineffective in the US due to free speech issues and regulations.

·        Draper Dragon selectively figures out where their portfolio companies should go public by gauging the tradeoff between investor reception and regulatory concern. For example, portfolio company Jing Jin Electric (a developer of high performance electric motor systems) was going to go public in the US in 2021 but pivoted to China and its healthier investor appetite.

·        Biotech is booming in Hong Kong. Draper Dragon portfolio company Fountain Medical (a large cross-border contract research service for pharmaceutical and medical device clients) will take advantage of the trend by filing for their IPO in Hong Kong.

·        Tang sees three vital opportunities for Blockchain: an optimized exchange to onboard fiat to crypto currency, a more consumer-friendly graphical user interface, and the creation of a killer app. 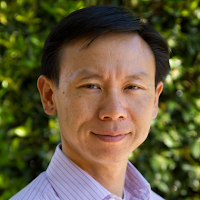 ang is a partner at Draper Associates in Silicon Valley, since 2015.  He was a founding member and is now Managing Director of the Draper Dragon Fund, a China/US cross-border early stage investment fund. In 2015, Tang became the CEO at Draper University, a residential program for young entrepreneurs that has moved online due to Covid-19 for the foreseeable future.

Tang has more than 15 years of operating and early-stage investment experience in high tech. He was a Principal at Infineon Ventures from 2002-2006 and a Managing Director at ABB Technology Ventures from 2011-2014. 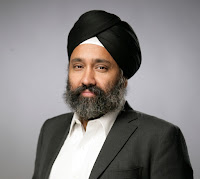 For our 15th Silicon Global Online episode, Ask A VC Anything, our featured guest was Mohanjit Jolly. A seasoned venture capitalist, Jolly is a Silicon Valley-India connector, and currently a partner at Iron Pillar Fund. Jolly discussed his passion for making an impact on the Indian venture ecosystem, current technology trends in India, Iron Pillar’s new Top Up Fund, and the impact of Covid-19 on his portfolio companies and India.

1. Indian companies have always had disparate teams. As they were already used to remote working, India is quicker to adapt to new working realities than their Silicon Valley counterparts.

2.     2. India ranks as the 3rd largest country in venture capital spending, and will see north of 100 unicorns over the next five years.

3.     3. The India government’s $1.5 billion fund of funds in early 2017 to invest in venture funds backing Indian startups has been a big boost.

4.     4. Through the democratization of technology and software from Amazon’s AWS, Microsoft’s Azure, and Google’s Cloud, Indian entrepreneurs are now able to build products in tier 2 and tier 3 markets, not just major tier 1 markets.

5.     5. India has the lowest data rates as well as the cheapest but still fully functional smart phones in the world. The natural conclusion is that there is massive pent-up demand for consumption.  Thanks to the push towards 5G, video consumption, gaming and live streaming will all see big upticks in the near future.

6.     6. Startups in the healthcare sector need to play a bigger and better role to impact broader India.

7.     7. India is NOT a homogenous market. The top 1-2% of the Indian population has high-speed internet, the large middle class is growing, and the bottom 40-50% of the population operates in an agrarian economy. A “bounty at the base of the pyramid” exists. Large companies are developing through online access to content, community and commerce that serve the 600-700 million population of India’s agrarian economy.

8.     8. The pressure is on India to innovate. India must create 12-15 million jobs a year just to keep the unemployment rate steady.

9.     9. If there is one country that India is trying to mimic from a technology and technology entrepreneurship standpoint, it’s Israel. Israel is not a large enough market in itself, so the business focus is on expansion globally. More and more Israeli advisors are appearing on Indian companies’ investor decks.

1010. Notable quote by Jolly to Flipkart’s founders, “I look forward to the day that Flipkart will not be called the Amazon of India, but Amazon will be called the Flipkart of the US.” Although Flipkart isn’t there yet, the success of Flipkart spawned a mindset switch among Indian entrepreneurs to think bigger and believe that their company can grow and scale globally.

Here is a link to the show with Mohanjit Jolly.  See upcoming shows.

Prior to joining Iron Pillar as a partner in 2016, Mohanjit Jolly was a partner at Draper Fisher Jurvetson for nine years, splitting his time between India and Menlo Park. His venture career began in 2002 at Garage Technology Ventures in 1999, after working in tech innovation posts at Mattel and iTek. At DFJ India, which Jolly led from Bangalore, notable investments include online travel company Cleartrip, solar-powered lantern Dlight Design, and Attero Recycling, a recycler of e-waste and lithium ion batteries.

The Iron Pillar fund focuses on venture growth, targeting Series B and C stage companies with $10-$50 million financing rounds. Iron Pillar’s first fund of $90 million is fully committed to eight companies, including one exit in 2019: the sale of portfolio company NowFloats, a service for small businesses to go online in a simple way, to India’s Reliance Industries.

To support successful companies from its first fund, Iron Pillar raised a Top Up Fund in early 2020. Despite the onset of Covid-19, the fund was oversubscribed in seven weeks, reaching $45 million. The Top Up Fund invested in Uniphore in 2019, a conversational and advanced analytics AI platform specifically going after call centers and customer service verticals. John Chambers, former CEO of Cisco, took a 10% stake in Uniphore in late 2017.