From Made in China to Invented in China? 'Chinov8!'

A Silicon Dragon tech economy began in 2002 with Chinese returnees—so-called sea turtles who came home to lay their eggs—who cloned Google, YouTube, and Amazon, grabbed Sand Hill Road money, and scored on NASDAQ and the NYSE. Today, homegrown Chinese entrepreneurs are snapping up venture capital from Chinese currency funds for even more clones—Beijing techie Wang Xing alone has cloned Facebook, Twitter, and a Chinese GroupOn.
The needle is gradually moving from “made in China” to “invented in China.” Micro-innovations tweaked for the local culture are cropping up more often. Sina’s Weibo, a hybrid Twitter-Facebook, layered in video and photo sharing before Twitter did. The long-awaited promise of disruptive technology from China is coming, too, symbolized by China’s climb to fourth place worldwide for new patent applications. GSR Ventures–funded LatticePower in Nanchang counts more than 150 patents for making low-cost efficient LED lightbulbs.
But China technopreneurs are still in those awkward years of adolescence. The next Jack Ma of Alibaba fame has yet to emerge.
The fissures in the wall are there, for sure. Doing business in China also means dealing with corruption, fraud, lack of the rule of law, inflation, censorship of Web content, and China’s notorious counterfeiters, who have popularized a whole industry of cheap knockoff or shanzhai cell phones.

That’s a long list of ills, but the tides are shifting and swiftly. As China’s Silicon Dragon evolves as a startup frontier with multiple undercurrents, it could even one-up the original Silicon Valley and become a technology superpower. That may be only a decade or two from now.

Our expert panelists include Brad Bao of Tencent, Bill Tai of Charles River Ventures, Tim Draper of DFJ, Richard Lim of GSR Ventures plus Marguerite Gong Hancock of the Stanford Program on Regions of Innovation and Entrepreneurship. We’ll be hearing more from our featured Chinese tech entrepreneurs Jeff Chen of Maxthon (China’s Internet Explorer plus) and Haidong Pan of Hudong (China’s Wikipedia plus), who are flying in from Beijing to speak at Silicon Dragon ‘Chinov8!’ during China’s National Day Holiday.
Read more at my Forbes post:
http://www.forbes.com/sites/rebeccafannin/2011/09/22/from-made-in-china-to-invented-in-china-chinov8/
Posted by Rebecca A. Fannin at 2:03 PM 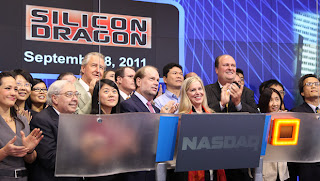 Following are my remarks by journalist entrepreneur and author Rebecca Fannin at NASDAQ, Sept. 8, 2011, the day her group Silicon Dragon rang the closing bell. It was a tribute to the Chinese entrepreneurs in this growing Dragon community who have taken their startups public in the U.S.

I’m very excited to be here today at NASDAQ with so many friends, colleagues and members of the fast-growing Silicon Dragon community. Thanks to NASDAQ and to Sidley Austin for your partnership and for making Sept. 8 a special day we can long remember – and not just because 8 is lucky in China.
Standing here today and getting ready to ring the closing bell gives me have a sense of what it is like for those Chinese entrepreneurs I’ve covered to actually go public on NASDAQ. I’m thinking of Robin Li who took Baidu public here in 2005 and then posed in front of that big NASDAQ neon sign at this Times Square headquarters. Robin is now one of China’s billionaires as the head of China’s search engine. And I’m thinking of Gary Wang of Tudou who went public here a few weeks ago and rang the closing bell. I recall interviewing Gary for the first time in Shanghai in 2006 when his video sharing site was new and picking up its first financing from venture investors. And yes, I’m thinking of Joe Chen of Renren, China’s Facebook-plus, who is now busily running a public company. Standing here on stage with me is David Chao of DCM who was an early backer of Joe’s startup and who was with Joe on stage when Renren went public this past May.
While Silicon Dragon is not about to go public any time soon -- well, who knows? Maybe someday we might! I do get inspired by the entrepreneurs I interview and profile! What we have done is play our part in documenting the historic rise of China’s entrepreneurs and their coming out party internationally. And we have helped to create a community linked across borders – from Beijing and Shanghai to Silicon Valley – by having gatherings such as the one we will have at 5pm today here for experts to exchange ideas and hopefully benefit from the learning.
While investing in China hasn’t really hit Main Street yet in my hometown of Lancaster, Ohio, (hi, Mom!), it’s no longer considered so foreign or even so risky – despite some recent accounting scandals we’ve read about in the press with U.S.-listed China companies and controversial reverse mergers. I know some here in the audience who have profited from well-timed buys and sells of shares Chinese companies that were financed by Sand Hill Road’s venture elite. So it is possible to get solid returns that can match those from US companies.
As a journalist and an author profiling China’s entrepreneurial leaders and up and comers, it wouldn’t be right for me to invest in those companies I cover. Sure, I have my favorites. It’s based on instinct and impressions of the founders themselves as well as hard-won access to the inner workings of their startup strategies.
I’m glad I’ve had this opportunity to be one of the few journalists documenting this unfolding story of China’s advances from ‘made in China to invented in China’ – the theme of my first book, Silicon Dragon. As I say this, my second book is off to the printers. Book 2, Startup Asia, takes the China story into India, Vietnam and other Asian hotspots and profiles the next generation of Asian entrepreneurs who stand a chance of ringing the closing bell.
This is work I love to do and do naturally, with no boss telling to me what to do (I am my own worst boss) something I’m sure all the entrepreneurs I’ve come to know in China, India and beyond could relate to and then some.
To quote one of the more famous Chinese entrepreneurs I’ve written about -- Jack Ma, the founder of Alibaba, who is now a billionaire from taking his Chinese startup public – “when I am myself, I am happy and have a good result.”
That rings true. Let’s all celebrate by ringing the bell!
Posted by Rebecca A. Fannin at 11:55 AM