Our Silicon Dragon 2010-Beijing panelists debated the topic of whether China is a tech innovator. The conclusion? The trend is starting, but will be more pronounced in another decade. Sonny Wu of GSR Ventures (right) showed the LED lightbulb that his portfolio company LatticePower has just begun to produce for the mass market. Feng Deng of Northern Light Venture Capital (left) pointed to one of his China deals as a breakthrough poised to hit big-time!

But he noted that stronger links between China venture capitalists and university labs need to develop as they have in Silicon Valley with Stanford and Berkeley universities. KPMG's Egidio Zarrella pointed out (center) that while small and medium-sized businesses are at the forefront of disruptive technologies, we shouldn't ignore the vast amount of R&D going on at major corporate labs in China's massive software parks. Sina co-founder Hurst Lin of DCM (left) argued that China needs to develop more of a creative culture akin to America's before it can truly innovate. He also pointed out that China needs education reform to encourage students to go beyond tests of their memory skills and to develop critical learning skills. Former Google China leader Kai-Fu Lee argued that there's no tech race between the U.S. and China, a point well taken by his fellow panelists. He pointed to the arrival of 3G mobile communications as a catalyst for innovation in China.
His own Innovation Works incubator lab has eight business projects in the works, with 30 planned by the end of this year. Look for IW to need more funds soon to back all the startups it's doing. I know. I've recently visited the labs and they're running out of space, just in time to move to bigger quarters.

Tech entrepreneur Charlie Paglee (right) of Brannan Auto told how his Shanghai-based subsidiary is working on more efficient batteries for electric vehicles-a must for China and the polluted air in all the major cities I've visited!

Meanwhile, Faming Zhang (left) described the discoveries that Crown Bioscience is making in finding a cure for cancers common in Asia--lung cancer being the most predominant. I recently visited Crown Biocience, housed in one of Beijing's immense life science parks and out so far from Beijing central that it's nearly at the Great Wall. Look for China to move upstream in biomedical, judging from the multiple interviews I've done recently with CEOs of several emerging companies in the life sciences. 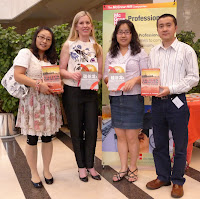 Before the evening was up, Silicon Dragon author Rebecca Fannin autographed copies of the new, updated Chinese edition of her book. The books were graciously provided for the guests by her co-publishers McGraw-Hill and the University of International Business and Economics Press.

Our thanks to Roc Yang of China Data Group, an emerging player in outsourcing of financial services, for making introductory remarks and donating the books to our guests. Roc (left) also helped to facilitate the translation.
And a big thanks to our sponsors KPMG, O'Melveny & Myers, DCM and GSR Ventures. We couldn't have held this event at Beijing's Silicon Valley--Tsinghua Science Park--without you! 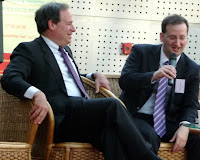 Finally, let me acknowledge AVCJ's Dan Schwartz for his own newly published book. Forbes Beijing bureau chief Gady Epstein (left) led an active Q&A session to ferret out the contents of Dan's book, which focuses (among other topics) on the future of venture capital globally.
Now onward to Sand Hill Road, October 7, and our next event! The program will be held at Rosewood Sand Hill, with an all-star group of panelists once again--Dick Kramlich of NEA for starters. And there's likely to be a surprise appearance by one of our best-known Silicon Dragon entrepreneurs. The theme of our next event? Of course, it is "China Shakes the Venture and Entrepreneur World."
We plan to continue to capitalize on the trend by holding our next China-side event in Shanghai, November 8. See Events at www.siliconasiainvest.com for more details.
Posted by Rebecca A. Fannin at 2:37 PM