Silicon Dragon is Ringing the Bell at NASDAQ! 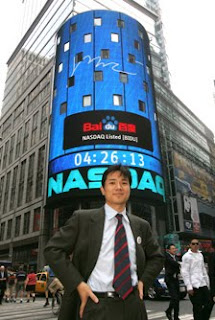 Deals / IPOs / Returns: China Style
Chinese up and comers following the lead of Baidu founder Robin Li are racing to U.S. IPOs yet risks and challenges keep multiplying. What are the best startup and investment strategies to win the trophy?


Register for the live webcast or replay:
WEBCAST
http://bit.ly/pEYfSr

Thanks to our sponsors:
Sidley Austin NASDAQ OMX

Timing Not on Tudou's Side with IPO

Timing is everything, as Tudou CEO Gary Wang knows all too well.

Tudou had the lead in China’s online video sharing space. It beat Youku to a product debut by one year. Tudou was also the market leader for several years. Now, Youku has jumped to the market lead and beat Tudou to an IPO by eight months.

You can bet that Wang wishes he could have gotten his startup public late lst year, when it was originally scheduled to go before getting detoured by accounting issues and the CEO’s divorce. The market is a lot tougher now than it was back in December, when Youku scored one of the best-performing IPOs since Baidu in 2005.

Bets were that Tudou might not make it out in this tough market. Credit for perseverance has to be given to Wang, co-founder Marc van der Chijs and Helen Wang, the venture investor at GGV Capital who spearheaded an initial $8.5 million investment in Tudou when video sharing was fairly new. They rang the closing bell at NASDAQ this week, and I get to do the same soon, though for different reasons.
http://siliconasiainvest.com/SiliconDragonNY2011.aspx

I’ve followed Tudou ever since I first interviewed Wang in Shanghai in 2006 for my book Silicon Dragon, shortly after he picked up the first venture financing for his video sharing site. See abov photo I took. Back then, the biggest issue was trying to figure out how to pay for increased bandwidth to run a surging number of videos.

I’ve tracked his career since then. See a Silicon Dragon video interview I did with Gary in 2008 for some insights into his strength of character. We were meeting at a shopping mall in Beijing at the time of this interview, during a Chinese government crackdown on video content.

When one of the Chinese entrepreneurs I profiled in my book, Silicon Dragon, gets his or her startup to NASDAQ or NYSE, I can’t help but feel a little proud. Tudou makes the fourth company to cross that line. Renren and Dangdang were also in that league. There are several IPOs among those profiled in my next book too, coming soon. The new book also covers India as well as China, and the Indian IPOs included MakeMyTrip and recently filed JustDial.

But of course, going public is really only the start of a new and tougher chapter, not a finale.
See my posts at Forbes:
http://www.forbes.com/sites/rebeccafannin/2011/08/19/timing-not-on-tudous-side/