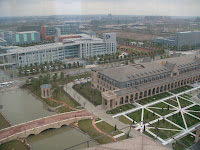 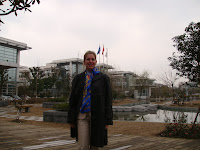 Here's some photos from the Shanghai Zhangjiang Hi-Tech Park that I recently visited. While the place doesn't have the palm trees and sunshine of Silicon Valley, it scores high on facilities. Take a look at those tennis courts and even a canal. It's a little peculiar that the design theme is remniscent of Versailles, but hey you can't argue with success. This 25 kilometer square park houses several large semiconductor companys including SMIC, insurance company Ping An and Wipro, among dozens of tech, digital media and biomedical firms.
I can't say that I saw a lot of people milling about outside, like you might see on a typical day on the Yahoo, EBay or Google campus. It was in fact rather lifeless. But maybe that's because it was a little chilly and who knows? Maybe they were all inside, working hard to fulfill that master goal to make China a tech innovator.
Posted by Rebecca A. Fannin at 3:05 PM