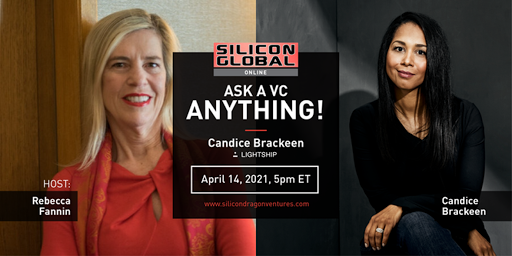 For this 31st episode of Ask a VC Anything, our featured guest was Lightship Capital founder and General Partner, Candice Brackeen. In this conversation with Silicon Dragon’s Rebecca Fannin, we covered Lightship’s selection process and successes, why she made her fund so inclusive, and if the rust belt cities can transition to tech. Here's the video replay of the show with Candice.

Lightship Capital has an inbound and an outbound strategy. For the inbound, everybody comes to Lightship Capital, including their website and online show, Twitch Pitch. On the outbound side, Lightship is sourcing deals with co-investment partners. The firm also has accelerators in Detroit, Cincinnati, and Tulsa. Lightship is a seed and Series A fund and is usually looking for companies approaching $100,000 in monthly revenue. Brackeen notes that for industries like AI, that revenue number is less attainable for a seed investment. It is most relevant in sectors like consumer-packaged goods where proving the model is easier.

Brackeen was proud to talk about some of her winners. She referenced Healthy Roots Dolls, a startup that helps young black girls better love their hair. They recently sold out on Target.com. Then there’s Proov, a progesterone ovulation test, the first urine diagnostic test for women to test for progesterone levels when struggling with fertility. Proov got FDA approval last year. After starting out in only select Target stores, the company is now launching nationwide. Another one of Lightship’s successes is Kare Mobile, a mobile dentistry company. They were just one van when they went through Lightship’s programming in Cincinnati. Kare is now in ten markets around the country and looking to expand. Kare Mobile is doing a pilot in Detroit right now with Ford Motor Company and Delta Dental giving away a $150,000 mobile dentistry van to an up-and-coming dentist in the area! Brackeen’s last example of investment successes is Haute Hijab, America’s only hijab company for modest dressing Muslim women.

Although Brackeen is a Black VC, she is not only looking for black founders. She notes that although around 85% of the U.S. is not white men, that’s where most of the funding has gone. She feels confident that by focusing on this 85%, she is in a good position. Brackeen is looking to fund women, people of color, and many other historically underserved groups. Brackeen says she believes we will start seeing more women and people of color closing significantly larger and larger funds. She thinks over the next 10-20 years, these diverse funds will be the ones that are innovating and leading the way, and the ones that don’t diversify will get left behind.

One of the biggest problems in the Midwest, according to Brackeen, is with bragging about their successes. She’s convinced that midwestern states can attract talent and investment just like the coasts, but she notes that entrepreneurs from smaller inland cities need to be taught to tell their story effectively and to dream big.

Brackeen grew up in the economically depressed Toledo, Ohio. She describes the wonder of seeing the skyline and professional sports teams of Cincinnati in contrast with her hometown. So for her, on a relative basis, she calls Cincinnati her San Francisco. Brackeen notes that big-time innovation is happening in the city. Look no further than Procter & Gamble, as well as Kroger. Just because these aren’t B2B SaaS companies, doesn’t mean big things aren’t happening.

Candice Brackeen and her husband, Brian Brackeen, run Cincinnati-based Lightship Capital, a rare venture-capital firm managed by black partners. Lightship has just raised a $50 million fund to invest in minority-led founders in the Midwest and has backed eight startups. Brackeen previously ran the Hillman Accelerator, coaching and mentoring founders, and earlier in her career, she founded her own tech startup in the Heartland.  While the venture capital industry is competing to get into hot deals in Silicon Valley, she is convinced that good returns are coming in overlooked businesses outside the mainstream.  Brackeen has a BA in Economics from the University of Cincinnati.