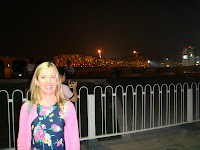 The Beijing Games were billed as the world's first web 2.0 Olympics--the time when social networking over the Internet and video streaming would shine as they reflected China's glory of hosting this grand event. But I found it not so.
Facebook was slow and often not accessible. Email was unreliable and often stopped for up to eight hours, then it would suddenly pour into my In box all at once, in a virtual avalanche. The Internet was moving at a crawl. I couldn't access Huffington Post to submit blogs there, but through an email to their NY-based editors, we got my posts live. See Fannin under Huffington Post and you'll see my three posts from the Olympics.
Too many office workers were tuning into live broadcasts from the Web such as those delivered by video streaming service PPLive, a Chinese startup funded by venture capital investors I know in Shanghai. PPLive was the only way I had the chance to see the Olympics live, and that was pretty challenging. I had to guess which Chinese characters represented which commands, like "play." NBC television could not be seen in China since it's the Chinese government's CCTV that has the rights to broadcast the games in the Mainland.
Some web sites remained blocked. Hotmail was certainly not hot, but cumbersome to log into from China. Even the much-promised 3G or third generation mobile phone service was not widely accessible during the Games, although text messaging worked OK. High-speed wireless Wi-Fi service to access the Internet was supposed to be there in abundance but I could never get a strong signal. Maybe there were already too many people on the network at the same time. So how to stay connected with contacts while at the Olympics?
I tried out the microblogging service Twitter, and liked it for its instant gratification. I communicated with friends and colleagues over the fast-paced text messaging system. It even became my best source of real-time news through a tag #080808, specifically set up to follow the action during this period of the Olympics.
When the lip-synching was uncovered at the opening ceremony, Twitter bloggers were all over the news. That's where I first read about it. When China's gold medal hope Liu Xiang withdrew from the road and track competition, I heard about it first on Twitter. Thanks goes to that group of "Twitter'ers" who joined together to create an Olympics series of "tweets." Even the Today Show was on Twitter, and I followed their updates regularly to see what was happening at the Olympics Green. An editor invited me to stop by the set one night, a message delivered to me by Twitter. But we weren't able to make the connection, until too late. See photo above of me at the Bird's Nest on Tuesday night. Oh well, there's always New York's Rockefeller Center. See you there, Matt!
Posted by Rebecca A. Fannin at 6:15 PM