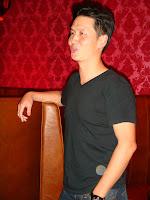 My book, Silicon Dragon, covers a generation of Chinese entrepreneurs who copied the best ideas from the dotcom days. Now,during my whirlwind week in Beijing, I've seen many dining and lodging concepts copied from the West, too. On Thursday evening, I ventured out to a new boutique hotel in the popular Sanlitun district, Hotel G, that is decorated in retro 1960s. (You have to like purple to love it.) Off the lobby is the hotel's restaurant 25 Degrees, which strives to be a carbon copy of the burger bar of the same name in the famous Roosevelt Hotel on Hollywood Boulevard. Both hotel properties are owned by Hong Kong-based Gaw Capital. While I was enjoying my burger with sun-dried tomatoes and onions, the owner of the joint, Goodwin Gaw, came by to chat. Turns out he's a Stanford grad and has funding from some of the institutional investors I know. Here's a photo of Goodwin (above) that I snapped at the restaurant.
Posted by Rebecca A. Fannin at 8:13 PM