Beijing is a ghost town 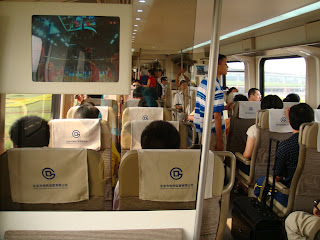 Big surprise! I've arrived to find Beijing a ghost town during the Olympics. Where are the crowds? No need to worry about traffic jams. There aren't any. My flight from Vancouver to Beijing had 50 seats open and I got three to myself -- just the thing for beauty rest. At the airport, I sailed through customs and picked up the luggage in about 15 minutes. Then, I boarded the new high-speed rail link from the airport to downtown. From there, I transferred to the new subway line 10, and made it to my destination within 90 minutes of landing.
The new Airport Express was efficient, fast and inexpensive but not entirely smooth. See photo I snapped on the train--actually the image won't upload for some cranky reason but I won't say more here. The doors did not open when the train missed the opening at the platform. Signs at the airport weren't clearer about where to catch the train. I went down three flights of escalators and ended up in the parking garage before finding my way to the ticket window -- thanks to a Beijing Olympics volunteer (an English-language teacher at a private school) who guided me to the right place. As the subway pulled into my station, I looked around for the right exit. Just in time, another volunteer came up and directed me to Exit E. Then, he offered to help me tow my luggage to my destination some three blocks from the station. I gladly accepted.
While not up to the standards of the Hong Kong airport express, it was certainly an improvement over most public transport in the U.S.--my latest journey on an Amtrak Bus from Seattle to Vancouver as my last memorable excursion. The King Street Station in Seattle was eerily empty and the bus was an hour late as it waited for a delayed train to synch up with before departing.
All in all, just glad to be in Beijing and ready to get caught up in the excitement!
Posted by Rebecca A. Fannin at 10:56 PM