I've recently returned from a wonderfully productive trip to Taiwan, where I had the opportunity to check out what this island nation is contributing to our tech future.
Not only did I meet with CEOs of some of the leading technology companies in Taiwan--semiconductor giant UMC, networking equipment company D-Link and PC maker Inventec-- but I also had the chance to interview several entrepreneurs of up and coming companies.
Did I find much original breakthrough technology? Some. Indeed, the venture capitalists that I interviewed--from YK Chua from WI Harper and Ben Yang from Pacific Venture Partners--are finding it difficult to find new startups to support financially. Many venture capitalists in Taiwan have started to invest in deals across the straits instead, in Mainland China. Still, I did get to visit with two entrepreneurs who claim they have breakthrough discoveries in the field of light-emitting diodes. 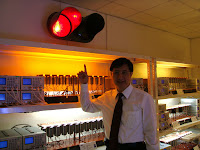 The first, photographed here, is Jeffrey Chen, CEO of NeoPac Lighting. My driver had a tough time finding the firm, on a side street of Chubei City near Hsinchu Science Park--Taiwan's equivalent to Silicon Valley. But once there, I was treated to a bright display of the firm's LED lights, which shine for up to 50,000 hours with less power. By the way, Chen has a wall of patents in his office to show for his work.
It was unfortunate that we were rushed for time. I didn't want to keep the director-general of the Hsinchu Science Park, Dr. Randy Yen, waiting. He told me that today the science park houses the two largest semiconductor producers in the world, TSMC and UMC, in addition to leading IT design house Mediatek. But it wasn't always that way.

In fact, in the early years of 1980s, Taiwan had intentionally copied the Silicon Valley tech model but had trouble attracting firms. It wasn't until 1989, Dr. Yen said, that the government adopted a policy to foster the development of the so-called integrated circuit business. Once the PC took off soon thereafter, the foundries ramped up quickly. Now that sales are slowing with the financial crisis, the science park is developing a biomedical campus, just a 15-minute drive away on the other side of the river. Right now, these companies generate less than 1 percent of the park's revenues, but Dr. Yen predicts it has "great potential to grow," developing new drugs and medical devices.
Later that same day, I interviewed another entrepreneur--Trung Doan--whose firm SemiLEDs has figured a way to make LEDs on copper, not the typically costly material, sapphire. The company has more than 60 patents for the process, which makes those little LEDs relible, high quality and and low cost, according to Doan. Strange but true that this startup has $10 million in funding from the Simplot family of Idaho potato fame! How? Chips and chips? No, not really.

Well, Doan tells me he immigrated to the states in 1975 from Vietnam to earn an enginneering degree from UC-Santa Barbara and work at a series of tech firms in the U.S. and Europe, and eventually settled in Boise, working at Micron (which got its start thanks to Simplot). Doan said he chose Taiwan to base his current operation because of the goodies that were offered--no tax for the first five years, and great infrastructure at the Hsinchu Science Park. So far, so good. The company is selling 5 million units per month and chalked up revenues of $16 million last year with a team of 230 people.
Posted by Rebecca A. Fannin at 7:21 PM