Silicon Dragon has fun in Beijing 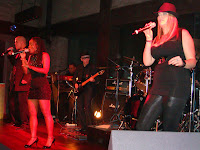 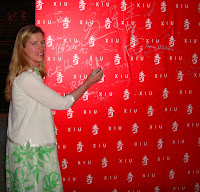 Ok, I admit to having a little fun during my recent trip to Beijing. For one thing, I had a chance to stay at the new Park Hyatt and check out the gym, the high-tech toilets (yes!), and even attend the opening of the hotel's spectacular new rooftop bar, Xiu. There I heard a Canadian band performing western rock tunes, in China. See photos. I wondered why the Hyatt didn't hire locally, but then again the band was superb and they'll be there for another few months.
What did I like about the hotel? The wrap-around, picture windows that offered a 360 degree view of Beijing--and on a long holiday weekend, when the air was exceptionally clear. I saw the mountains that ring Beijing! Stunning. I also liked having breakfast on level 66--that's the top floor of the Hyatt. The reception, by the way, is on the 63rd floor.
What is also great about the Park Hyatt is its location. It's at the intersection of two main thoroughfares in Beijing--the East Third Ring Road and Chang'an Avenue.
This is the most popular business meeting area in town, with convenient access to the airport from the newly opened Subway line 10. Several of the people I wanted to interview came to meet ME at the Park Hyatt, and we sat in the lounge chairs, chatting on the 63rd floor, undisturbed. I even did some video interviews there with Silicon Dragon subjects. I'm used to doing all the treks to their offices, so this was a pleasant change and could spoil me for future visits.
What I didn't like about the Park Hyatt is the elevators, or lifts. To get to my hotel room on the 46th floor, I had to take one bank of elevators to reception, round the corner and take another elevator down to reach my floor. Going to the main gym and spa requires similar maneuvers. Anyhow, it's not a big deal, but IS a time waster.
The rooms are light and airy with several special touches like the rain showerhead and the deep soaking tub, as it's called. I particularly liked the walk-in dressing room, the mood lighting and the electronically operated blinds--fully open! Everything with high-tech worked well in the room--flat-screen TV, high-speed Internet connections, DVD. I bring this up because usually there is a problem figuring out how everything works (or doesn't), even in a five-star luxury hotel.
Business guests who really want to wow a would-be client might consider inviting them to a meal in one of the level 5 private dining "suites"--some with their own terrace. Here, guests can select from traditional Cantonese cuisine, and be catered to by their very own butler. Talk about being spoiled!
Lest you think that's the only fun I had, I did venture out one summery night to have dinner at a new restaurant, aptly named The Meat and Wine Co. My taxi driver had some trouble finding the address, Ch'ien Men 23. Understandable, because it's the former site of the stately U.S. Embassy compound transformed into a restaurant and bar complex. Memorable tasting times: the New Zealand pinot noir and the extra-tender steak I just couldn't resist ordering.
Posted by Rebecca A. Fannin at 2:27 PM