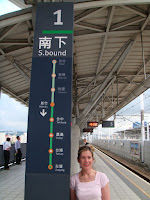 The next episode of the Taiwan tech tour takes place in the Southern Taiwan Science Park. I arrived at the Tainan train station by high-speed rail from Hsinchu (the science park to the north) and a 20-minute highway ride past factories. Only operating for six years, the southern park is newer and smaller than Hsinchu. It's also pursuing a different area of tech--cleantech. Even so, the park is home to 13 integrated circuit companies, 48 optoelectronics producers, 23 in the biomedical area, and 48 in precision machinery along with numerous government-backed research and development centers.
In the lobby of the science park, I had a chance to check my email and do some twittering before I was treated to a Chinese dinner by the Director-General of the park, Dr. Chen Chun-wei and his staff (see photo). 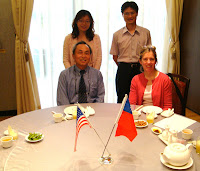 We talked about his goal of attracting more greentech companies to their site, which is in the countryside between Tainan and harbour city Kaohsiung. Among the lures are low-interest bank loans, no business taxes on exports, and a five-year income tax exemption for certain products deemed strategic. Since the park is new, there isn't much of a community base here, though there is a shopping mall and some restaurants.
For lodging, it was to Tainan city, where I checked into the contemporary Tayih Landis Hotel. Spacious rooms, free Internet, a tasty breakfast buffet and to top it off, a fully equipped gym situated on the fifth floor of an atrium. Not much time to work out though. After filing some stories in the early morning, I did a little sightseeing of Tainan's historic sites--the old fort, the ancient building covered in tree roots and limbs--and paused long enough for a tasty luncheon at a joint known for its shrimp rolls. See my plate. I ate nearly everything too, and wasn't hungry for a day afterwards!

Ok, next stop--Motech Solar. Here, I met with the general manager, Chang Kuo-en, for a briefing on the company's progress.

And it has been substantial! Motech Solar, which started in Tainan in 1999, is today's the world's eighth largest solar cell manufacturer in the world. It was ranked sixth just last year, but Mainland Chinese producers are coming up fast. Besides its four plants here, Motech also has a so-called "fab" near Shanghai. With revenues nearing $800 million for 2008 and sales evenly divided among the U.S., Europe and Asia, Motech is Taiwan's top solar cell producer with a 51 percent market share. It also owns a plant in Pennsylvania (the former US Steel factory turned into an alternative energy command post!) that I will drive by on my annual trek to Ohio for July 4th festivties and fireworks. Having mastered vertical integration, naturally the company's next goals are to drive down costs and build up power efficiency to as much as 1 Giga-watt (per cell?) As a going away gift, I got a nifty business card holder with a cover design of a solar panel. Before departing, I also had an opportunity to shake hands with the company's chairman and CEO, Dr. Simon Tsuo. Final note: does every tech exec in Taiwan have a PhD?
Posted by Rebecca A. Fannin at 1:51 PM