Ask A VC: David Lam, Atlantic Bridge > Why The China-Europe Bridge Is Widening 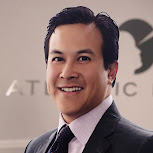 For our 19th Silicon Global Online episode, Ask a VC Anything, our featured guest was David Lam, a general partner at Atlantic Bridge Capital.  See these 10 takeaways from our wide-ranging conversation about international business and investment trends, with an eye toward China. 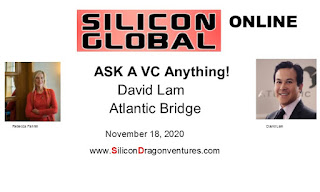 When the pandemic hit the US in March, Lam and Atlantic Bridge Capital used it as an opportunity to look closely at their portfolio companies’ balance sheets and calculate the impact Covid-19 would have on their businesses. The findings were mixed: some segments were affected, some were not impacted, while others actually saw positive momentum.

Growing portfolio despite the virus

Despite Covid-19, the firm remains right on its pace of three to four later-stage investments a year: Caption Health, Syntiant, and a European company in the semiconductor industry that is currently in stealth mode. Caption Health is an artificial intelligence company using AI for guided ultrasound for echocardiograms (an ultrasound of the heart). It is the first FDA approved AI guidance system. Syntiant makes an AI chip that is optimized for voice in devices ranging from phones to smart speakers. The stealth company is a semiconductor equipment company building technology around web processing.

The Gates foundation recently gave a $5 million grant for Caption Health to extend its breakthrough AI technology for heart ultrasounds, using vast data to capture an echocardiogram at a high-quality level. Caption Health is used at more than 20 hospitals in the US currently. Caption has huge relevance, since regular echocardiograms are recommended for all Covid-19 patients.

Many fast-growing US companies have highlighted China as an overseas business opportunity because of the size of the market, but current tensions has made expansion more challenging than ever. The interest from entrepreneurs to go to China right away has dampened, although the market is still a priority for many foreign businesses. In this environment, Europe is an appealing location: world’s top research institutions, wide pool of hirable software developers at a more reasonable salary than Silicon Valley counterparts, and strong companies in both hardware and software.  Some of Atlantic Bridge Capital’s portfolio companies have chosen to reincorporate in Europe. This allows them to run their businesses how they see fit and investors to own the same amount under the same terms as they would somewhere outside Europe. Most importantly, companies are able to sell their products to other markets, including China, which want to see goods coming from a neutral region.

In Europe, Lam has leveraged Ireland’s particularly strong relationship with China. One of his firm’s funds has a strategy of making equity investments in technology companies with a presence in Ireland and a substantial or strategic interest in China’s fast-growing tech companies.

As an example, a new Atlantic Bridge portfolio company, Syntiant (mentioned earlier), chose a general manager from China that was recommended by Atlantic Bridge Capital. The hire took place after a rigorous independent decision-making process by Syntiant.

Lam is quick to note the importance of IP protection as a foreign company. If the goal is to actually sell products to China and Chinese customers, it would be best to identify ways to augment existing IP in China for that specific market. You protect your IP by keeping your core IP where you are based.

One of the implications of a flattening of Moore’s Law is that the processing power starts to become more linearly correlated with power. This creates a huge challenge in terms of power management and environmental issues related shipping a lot of power. A number of exciting new technologies are developing in the power management space.

Focus on data and speed

With so much data being generated, so fast, the current infrastructure in most places is not equipped to handle these new data speeds. An investment opportunity exists in companies that can move data very quickly into a database. Atlantic Bridge portfolio company AtScale allows valuable content to be produced and then securely and privately stored worldwide.

CFIUS in a new US Administration

Lam expects to see some change in how CFIUS (Committee on Foreign Investment in the United States) laws are enforced in a new administration but it will likely be seen in a more case-by-case basis than in sweeping changes. He noted that the US Congress will continue to act on the belief that stronger CFIUS oversight is in the best interest of US national security.

Prior to Atlantic Bridge, David was Managing Director of WestSummit Capital where he served as its representative on the boards of Twitch (acquired by Amazon), Mirantis and Maginatics (acquired by EMC), among others. David was previously Managing Director for WI Harper, a ground-breaking US-China cross-border venture capital firm where he led the firm’s US office. His projects included the formation of Kai-Fu Lee’s Sinovation Ventures). Prior to that, David was Vice President at The Carlyle Group, a global private equity firm, after serving as head of business development for a Carlyle portfolio company. He also held various operating roles at CIENA Corporation, ONI Systems, Cisco Systems, and Proxim. David began his career as an investment banker at Robertson Stephens and Company. David is a board member, past president, and past chairman of the Asia America Multi Technology Association (AAMA). He also serves on the board of the Association of Asian American Investment Managers (AAAIM).

David holds a BS and an MA from Stanford University, and an MBA from the MIT Sloan School of Management where was a recipient of the Merit Scholarship and Patrick McGovern Award.