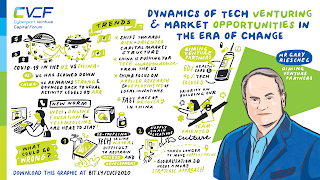 What's the new normal for tech investing today, and how is it evolving?

In a Biden administration, expect a softer tone in the anti-China rhetoric and possibly less targeting of specific companies like TikTok and WeChat that are primarily used for entertainment and communications but have been drawn into a tech cold war. That's according to Gary Rieschel, a founding managing partner at Qiming Venture Partners.

In his keynote address at the recent Cyberport venture forum in Hong Kong, Reischel emphasized that Chinese technology is increasingly considered a threat to Silicon Valley’s dominance. But he said it is primarily viewed as a long-term concern instead of the existential threat that the current Trump administration has made it out to be.

Rieschel also pointed out how the rest of the world is getting a firsthand demonstration of Chinese entrepreneurship. While the rest of the world has been busy grappling with a year of uncertainty, Chinese entrepreneurs stepped up to the challenge, he said. In a way, they were always ready given how they wake up every day and face regulatory, legal and competition-linked uncertainty with gusto.

Additionally, Rieschel believes that all the talk of supply chain relocation is overly ambitious. It’s not about resource availability or finding countries with lower labor costs. The network of relationships built during the early years of globalization can’t be dismantled so easily. Anyone running a supply chain knows this in their bones, he said.

China's drive towards self-sufficiency and technological independence should only boost technology development. Chinese entrepreneurs are racing ahead in a number of fields. As the robust health of the Hong Kong and Shanghai stock exchanges show, they also don’t always need to look West to get capital now that the two exchanges have relaxed listing requirements.