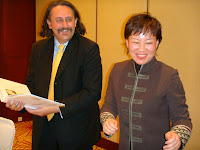 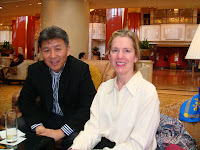 Some of my handiwork can be spotted in KPMG's recently released thought leadership report on China outsourcing. See "A New Dawn" in the Information, Communications and Entertainment section of the KPMG virtual library:
www.kpmg.com.cn
The report includes seven case studies based on interviews with CEOs of the leading Chinese outsourcing companies, including Neusoft chairman Dr. Liu Jiren (shown here with yours truly). Much of the research was done at site visits in Beijing, Shanghai and Hangzhou, where there was an opportunity to tour software parks and meet with government officials. There was even a dinner banquet with the deputy mayor of Hangzhou (see photo). Hangzhou is eager to attract more outsourcing companies to come join e-commerce leader Alibaba here.
What was interesting to me in doing the report was the close parallels I found between the rise of China outsourcing and the growth of "Silicon Dragon". These factors all point to China's push from "made in China" to "invented in China."
You only need look at the statistics to see a clear trend line in China's move from a manufacturing economy to a service economy. China has the fastest growth in the world in new patents applications, public offerings and venture capital investments. It also has the world's largest number of mobile phone users, Internet users and engineers.
If the trends continue, I have little doubt that someday China will have an outsourcing company that rivals Indian giants Infosys or Wipro. Certainly, there is a case to be made that China sourcing is "on the ascendancy," as Edge Zarella (pictured with deputy mayor Tong Guili), KPMG's IT "rock star," likes to say.
Posted by Rebecca A. Fannin at 8:40 PM