Few things are more fun for me than doing interviews in China with the new capitalistic group of business leaders. I love being "in the field," and out of the office, doing my journalistic work. Here are some photos taken during my interviews with the CEOs of China's leading outsourcing companies. 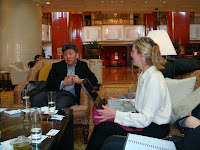 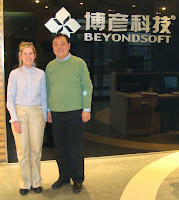 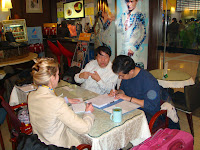 Dr. Liu Jiren, founder of Neusoft, China's leading outsourcing company. We met in the lobby of the China World Hotel in Beijing. What was remarkable is that he arrived solo, and left solo, with no PR handlers. This would not happen in the U.S.
Ben Wang, co-founder and CEO of Beyondsoft, one of the many "softs" in China's outsourcing universe. Beyondsoft does work for Microsoft.
Chris Chen, founder of NASDAQ-listed company Worksoft, with his translator. He spoke English well, though and didn't really need a translator. We met at the Beijing Airport. He was flying to Shanghai. I had just arrived in Shanghai. We met in a cafe at the airport.
Posted by Rebecca A. Fannin at 4:45 PM