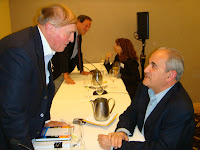 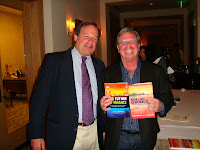 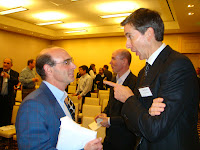 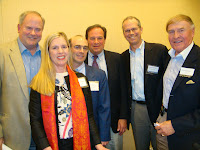 Silicon Valley may not be as dead as some folks think, at least judging from the remarks of our venture capital futurists gathered to discuss the state of the industry. Dick Kramlich of NEA pointed to the solid returns his firm has scored, Ted Schlein of KP fame talked up cleantech (and later got a lecture from Stanford's Tom Byers--see photo), Gary Rieschel of Qiming spoke of a China fever and Charles Comey of MoFo confided that's he working on a lot of new deals (even though he wouldn't confess just how many RMB funds he's working on for investment firms in China.) AVCJ's Dan Schwartz (photographed with George Drysdale) challenged the industry leaders to reconsider whether it's time that venture capital needs some sort of facelift or just a new strategy to face the new millennium, considering the losses of the last decade. At least March was a lot better than the previous 18 months for the venture business. So for now, I'm all for keeping up an upbeat spirit.
Our next futuristic event to challenge conventional thinking is April 21, at the Harvard Club NY. Contact me if you want an invite.
Thanks goes to our sponsors NEA and Morrison & Foerster. Couldn't have done this Silicon Dragon-Future of VC event without you! Rosewood too.
Posted by Rebecca A. Fannin at 9:37 PM