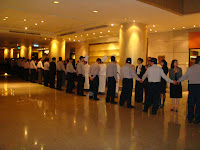 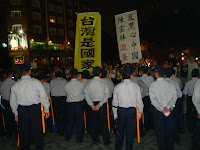 I swear I have seen hundreds more policemen here in Taipei this week than I saw in all of the Beijing Olympics! And many of this high security squad are standing in the lobby of my hotel or right outside. That's because a China high official has come here to discuss the Cross-Straits relations with political leaders, and many locals don't seem to care for that much.
Last night I was awakened at the fine hotel where I'm staying--the Grand Formosa Regent--by the sound of a grenade (?) exploding. Being toughened by years of living in NYC, I wasn't scared. And fortunately no one was hurt. I'm told that the official was trapped inside the hotel for several hours until police calmed down the protestors who want Taiwan to remain independent. See article in International Herald Tribune, http://www.iht.com/articles/ap/2008/11/05/asia/AS-Taiwan-China-Envoy.php
While I try to stay out of politics, one thing for sure is that there is a concerted effort in Taiwan to control the mob noise and to welcome their visitor from the Mainland. Indeed, even the staff (chefs too) at the hotel, which is part of the Four Seasons chain, were standing in welcoming lines applauding Chen's visit and trying to keep him from hearing the protest shouts. Take a look at the photos I hurriedly took in the lobby and just outside the front entrance. Later on, police formed a human shield to keep protestors from doing any harm. And when the protests turned uglier, the staff quickly ushered guests into elevators that quickly shut, to shield them from bloody confrontrations. Service is what separate a five-star hotel from a wanna-be star.
As I leaving the hotel on Monday at 5AM, reception at the club lounge offered me a neatly packed breakfast to take with me on the ride to the airport. I accepted. Now that's service!
Posted by Rebecca A. Fannin at 5:12 AM