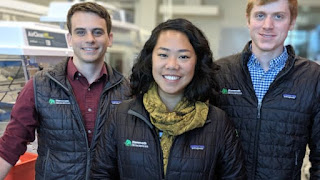 Nobel Prize winner Jennifer Doudna is the most well-known co-founder of CRISPR start-up Mammoth Biosciences, but Janice Chen, the sister of U.S. figure skating champion Nathan Chen, is also one of its four co-founders and the chief technology officer.
Posted by Rebecca A. Fannin at 8:37 AM