Robots Called Into Action In China Amid Cornavirus Outbreak 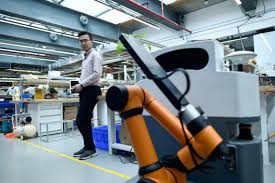 Chinese companies are rushing to deploy robots and automation technology as the coronavirus has spread throughout the nation.
As some 100 million factory workers return to China’s automotive, consumer
electronics and smartphone makers, one clear, longer-term impact will be an emphasis on robotics and automation. Robotics can reduce labor costs and increase productivity — and prevent a recurrence of future plant shutdowns.
Over the past several years, the world’s second-largest economy has been undergoing a so-called “robotics revolution.” Now, the impetus is greater than ever to embrace automation or be left behind. China has become the world’s largest market for industrial robotics and the fastest-growing market worldwide, surging 21% to $5.4 billion in 2019, while global sales hit $16.5 billion, according to the International Federation of Robotics in Frankfurt.
See Rebecca Fannin's article published March 2, 2020 at CNBC on robotics and the coronavirus impact.