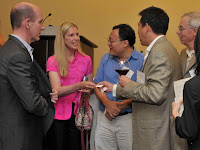 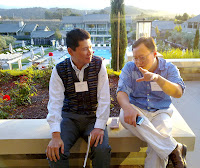 China Startups Battle The BAT
Rebecca Fannin
Forbes column, 10/18/2010
Chinese venture investing is growing ever less dependent on Silicon Valley.
Entrepreneur Joe Chen, who runs China's leading social-networking sites from his Beijing-based startup Oak Pacific Interactive, no longer looks to Silicon Valley for clues on strategy.
A Stanford MBA grad who formed and sold his first startup while still a student, Chen is rarely in the Valley anymore. That's because China's entrepreneurial roots have shifted away from there.
What concerns Chen most about keeping Oak Pacific Interactive healthy is not Silicon Valley stars Facebook, Google or eBay, but three giant Chinese brands he collectively calls the BAT--search engine Baidu, e-commerce powerhouse Alibaba and instant messaging service Tencent.
(See video)
http://www.youtube.com/user/RAFannin?feature=mhum#p/u/3/nnge-NM68Bg
These Chinese upstarts are so hypercompetitive that Chen finds himself continually aiming to outsmart these super-sized brands. But even as Chen does battle with the BAT, he has his eye on driving Oak Pacific Interactive to an IPO. See photo (right) of Joe with DCM venture investor David Chao.
In China, the action is shifting from returnee entrepreneurs--so called "sea turtles" who were educated in the U.S., got experience there and then moved back to China to start companies--and tilting toward what Chen calls "pancake turtles." Known for their ferocious eating habits and for being a Chinese delicacy, the pancake turtle is an exceptionally aggressive Chinese entrepreneur who is increasingly one-upping the returnees.
Not everyone agrees. While venture investors along Sand Hill Road may dig China, they still think Silicon Valley has a decided edge over the Mainland for innovative, if not disruptive, technologies--and will have it for at least another decade.
See Forbes column continued here:
http://www.forbes.com/2010/10/18/facebook-startups-venture-investing-intelligent-technology-china.html?boxes=Homepagechannels
Posted by Rebecca A. Fannin at 10:26 PM