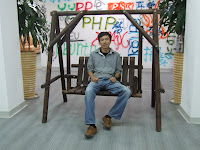 Video sharing sites worldwide have struggled to get the right money-making model and competition has been heated, but two Chinese video sharing sites–Tudou and Youku–are both expected to reach profitability and go public within three years.
Tudou.com founder and CEO Gary Wang (see photo) recently told Silicon Dragon News, “If we do go IPO, NASDAQ is a natural choice and it should happen within three years.”
Likewise, Youku CEO Victor Koo said in an interview with Silicon Dragon News that his video sharing site will reach profitability within three years and will then file for an IPO in Hong Kong of New York.
Predictions are that the field will narrow from four players to one or two standalone survivors in the highly competitive sector.
The positive outlook by Youku and Tudou comes as the online video ad market gained considerable momentum from the fourth quarter of 2008, with strong sales growth into 2009, noted one venture source in China. An IPO within three years is possible, he added.
China’s Youku, though getting a slightly later start in the market than Tudou, has gained the lead. It ranks eight in page views next to 12th for Tudou, according to recent CR-Nielsen rankings for page views.
Youku raised $40 million in mid-2008 from Sutter Hill Ventures, Chengwei Ventures, Farallon Capital and Brookside Capital, a fund affiliated with Bain Capital. Most were repeat investors from Youku’s prior round of financing at $25 million.
Tudou is backed by China’s IDG Technology Venture Investment Fund, which was a seed investor in late 2005, as well as GGV Capital. A second round of $8.5 million in 2006 was joined by IDG and JAFCO. A third round of $18 million was completed by Capital Today, General Catalyst Partners and KTB Network in July 2007.
Rival KU6 Holding Limited, which was funded by Draper Fisher Jurvetson, DT Capital Partners, UMC Capital and SBI Broadband Fund, was recently sold to Hurray! Holding Co., Ltd. for $37 million in what a Silicon Dragon venture source said was a distress sale since KU6.com was out of cash.
Posted by Rebecca A. Fannin at 6:25 AM