Sequoia Capital China partner is out the door 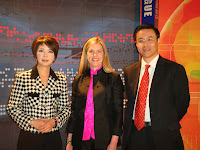 Several of my closest sources are telling me some big news on the China venture investing front. They say with the greatest confidence that Fan Zhang, one of the co-founders of Sequoia Capital's China outpost, is leaving the firm.
Now, Fan is not responding to my requests for an interview, so I can't confirm this news for sure.
But I believe it is true. UPDATE: And it IS true. See http://www.reuters.com/article/newIssuesNews/idUSHKG27937920090202
This comes after private equity firm Carlyle filed a suit against Fan's partner in China, Neil Shen, allegeing that Shen effectively stole a deal right out from under them. Maybe Fan did not like to be so high profile in that way.
Anyhow, what's significant about this is that Silicon Valley venture capitalists are struggling to hold their teams together in China. Sequoia is not the first prestigious player to lose a master deal maker. Kleiner Perkins did too, when former partner Joe Zhou walked from the firm to form his own fund.
I am sure that Fan will do well whatever he decides to do next. He is one of the biggest advocates of China's ability to innovate on the technology front. See my video interview with him here, http://http//www.youtube.com/watch?v=tBiydUSqRFE
Fan was a key early investor in search engine Baidu -- the Google of China. He has plenty of new deals in his portfolio that could reach similar heights.
The above photo was taken at CCTV's studio in Beijing, where Fan and I were interviewed for a half-hour show by host Tien Wei on her show Dialogue.