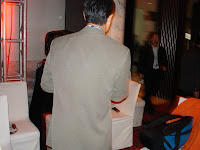 This is a photo I took of Baidu founder Robin Li. He is such a celebrity in China that he has to run away from fans. This photo was taken at an entrepreneur conference in Beijing, where Robin was a featured panelist. He made a dash for the door right after his panel ended to avoid being cornered by young Chinese entrepreneurs who want nothing more than to follow in his footsteps.
Posted by Rebecca A. Fannin at 9:43 AM